Back on the mainland we were reunited with our beloved campervan. This meant cracking on some tunes (George Ezra – Budapest: definitely our road trip song) and heading out on the open road once more.

First stop was a camping rest area to stay the night called Rollingstone Creek. Which looked a little bit like this: 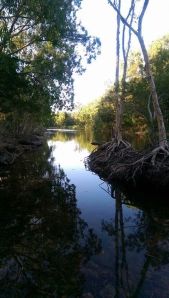 It was a peaceful area to camp, with other caravan and campervan goers and surrounded by nature. The creek, we were told, was safe to swim in (no crocs!). Although it was hard not to be wary when we went for a paddle in the morning!

The water was lovely and fresh and we escaped with no crocodile encounters (much to Mark’s disappointment).

An hours trip up the A1 and we were at the famous Mission Beach. Which as it turns out is pretty much just one long (very nice of course) beach, a scattering of bars and restaurants and little else to offer in regards of entertainment (unless you want to jump off a plane which sadly we didn’t have the funds for!).

So instead we did a lot of this…

Our next heading was to Wooroonooran National Park. Try saying that without stuttering! We kept forgetting the name and just calling it Woowoo. Here you can find the absolutely stunning Josephine Falls (filming location for Peter Andre’s Mysterious Girl video) nestled in the rainforest.

The waterfall itself has three main tiers.

The top: Where the waterfalls current plunge powerfully over rocks making swimming strictly forbidden. Photography however is not:

The middle: Swimming is still forbidden in this section, however there is an enticing vine swing that we saw a few people replicate Tarzan on.

The bottom: Now this was the fun section! 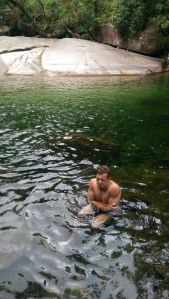 (it may have been a little cold…) 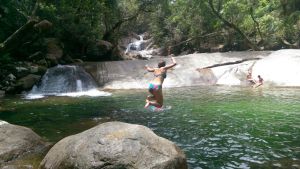 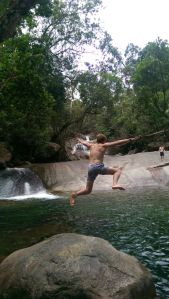 And maybe just a little posing (our apologies!):

As you can imagine with all the jumping, sliding and photo taking, we did not quite leave the waterfall unscathed. It turns out rocks are VERY slippery! Mark fell over and got quite a nasty graze on his arm and I slipped up landing on my bum, no graze just embarrassment! This took nothing away from the fresh water and fun of the waterfall though, we had a smashing time! 🙂

Just north of Josephine you can find the Babinda Boulders which we wanted to check out before setting off to Port Douglas. We took a windy path through the countryside to get to them, stopping off for some self-service (yep you heard me… self-service!) bananas from a local stall: 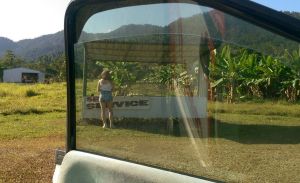 Here is me popping in some change in the money pot on the stall and grabbing us some yummy, fresh and ripe bananas!

Stomachs satisfied we went to explore the boulders. These are huge rocks, as the name suggests, formed and moved into strange and beautiful sights by the strong current of the river: 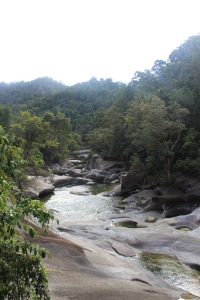 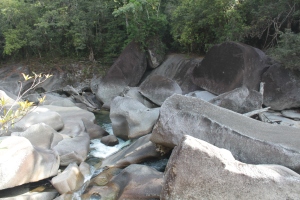 Around The Boulders there were signs everywhere warning strictly NO SWIMMING in the area. A couple of plaques suggested that there had sadly been some deaths in this hazardous location the past. We saw a local couple running over the rocks and jumping into the water, completely ignoring the signs, but of course we stayed well clear! No more accidents were needed for us!

That evening we had originally planned to camp in a spot near The Boulders, but as you soon learn when travelling, plans often change. Instead we decided to head straight up to Port Douglas to get a jump start on our exploration of the World Heritage Daintree Rainforest.

And that will be an explanation for the next post; which we promise you won’t have to wait around for too long (we will do it tomorrow!). So stay tuned because it involves some enormous animals with rather large teeth and somewhat smaller animals with 8 legs…

Thank you for being patient with us and hope you enjoyed the latest update!

We are now off for some more job hunting in Sydney!