We have been hearing that phrase a lot. I love it. I may have to start using it more often. So yesterday was our 2 week anniversary with our campervan! It is still running, we haven’t crashed it and we’ve only had one near miss with a kangaroo. All good!

The days are flying by and we have covered a lot of ground since Byron: 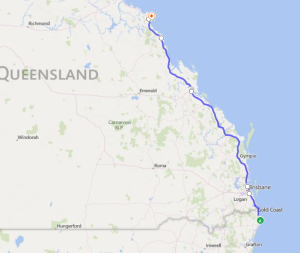 That is over 1500km, through rainforests, up mountains and beside oceans.

We have been to:

So here is a summary about each of the places we have visited. Some places we loved and some places we passed through quickly, but it has all been an experience.

Burleigh Heads was a little town that we stopped in on our way to Surfers Paradise. We took a nice strole along the seafront and ate some yummy fishcakes. From the beach you could see Surfers in the distance, with its high rise buildings jutting out into the skyline. 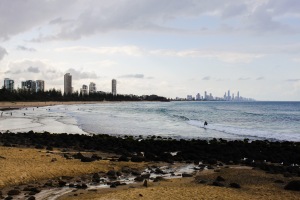 On our way in to Burleigh we actually got very distracted by a brown sign that said Wildlife Park. Now we had been advised by a couple in Byron to always follow the brown signs (they take you somewhere interesting) and we were glad we did! We ended up at the David Fleay Wildlife Park and had a great few hours exploring the amazing wildlife there. 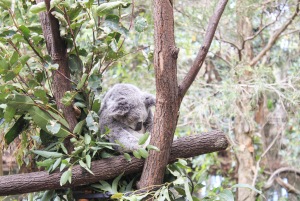 Now Surfers we weren’t the biggest fan of. This may have just been down to timing though. We arrived in the dark, it started raining, we got very very very lost and couldn’t find anywhere to park up and sleep. We eventually parked up down a random street and got a few hours kip feeling very miserable. The morning wasn’t much better, woke up feeling groggy and rather homesick and wanting to drive the silly campervan into the sea. Surfers main strip didn’t do much for us to lighten the mood, it was extremely touristy and a bit tacky. The pizza did though 🙂 and the beaches really were golden.

We had the pleasure (once our camper had struggled up a large hill) of watching the sun set behind these magnificent mountains from the lookout. All I can say is WOW and show you lots of photographs! 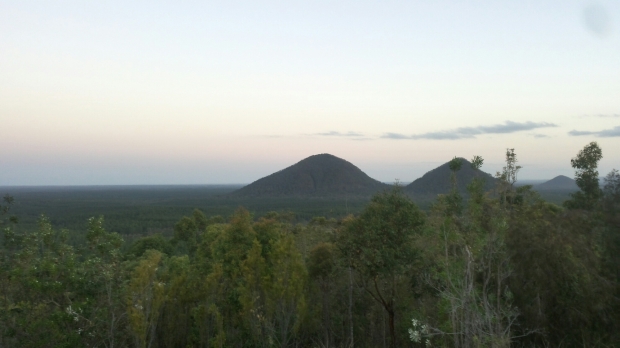 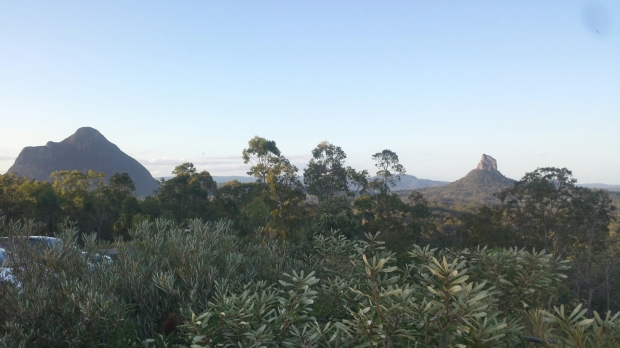 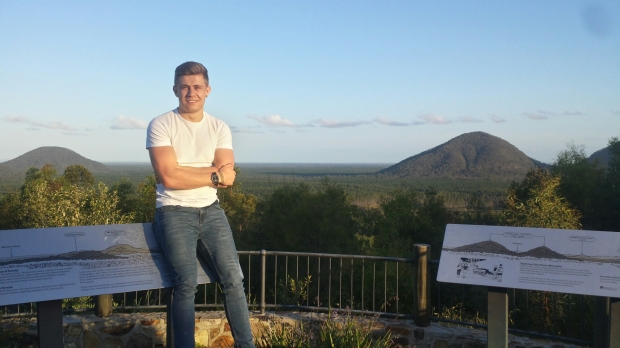 That night we camped in the first of many rest areas. A spot dedicated to long drivers in campervans and caravans to rest for the night. We found the toilets questionable and the fellow campers friendly.

WE LOVED NOOSA! Could have stayed there for weeks/months/years. We had planned one night there, we had three. This was why: 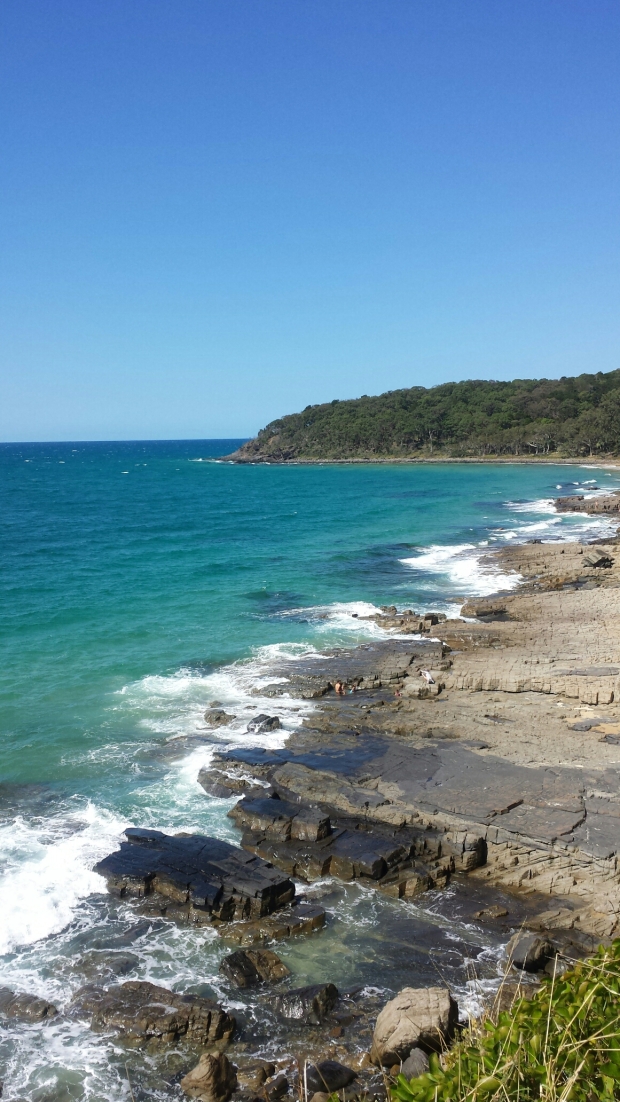 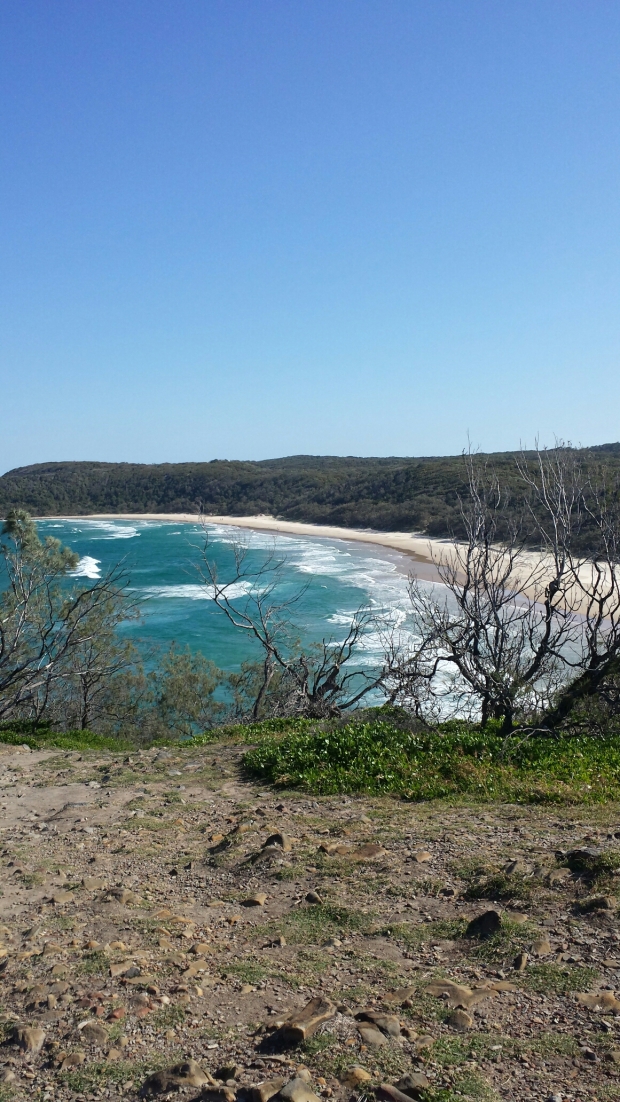 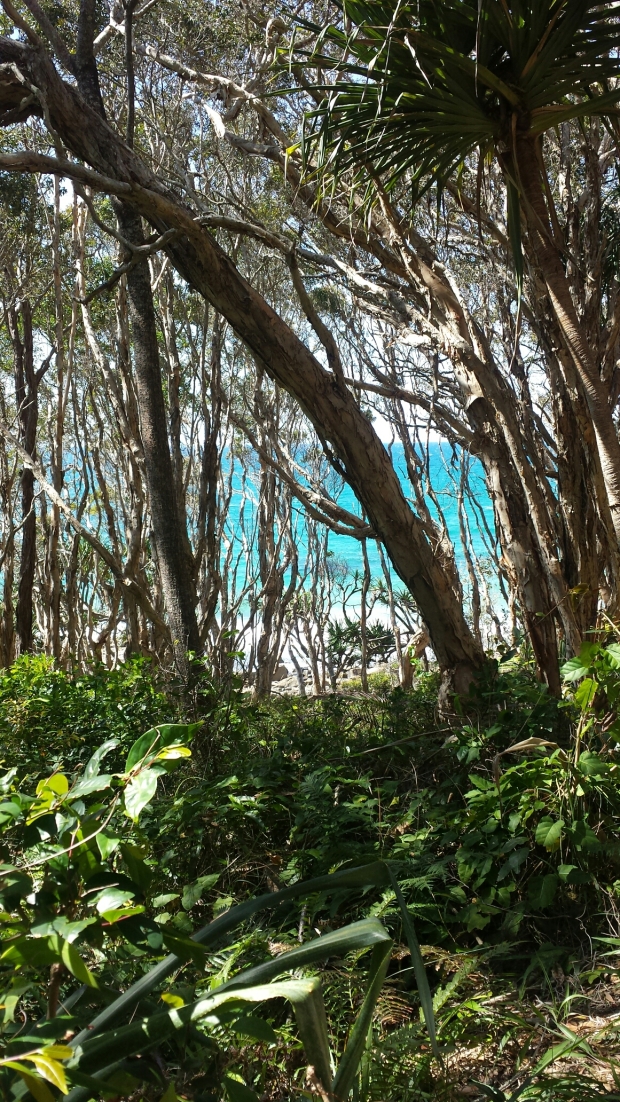 We stayed at the YHA Halse Lodge there, where they allow campervans to park up for a small fee and you get to use all the facilities as well. We met some great people there too and had a few rounds of table tennis. 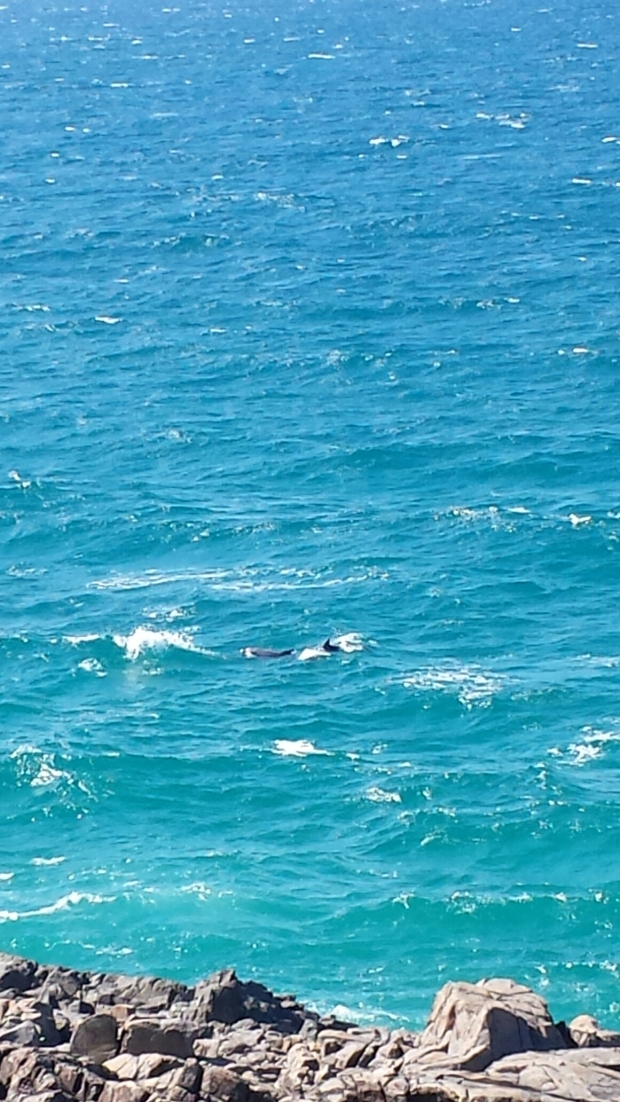 One of the most amazing experiences we have both witnessed. Truly magical to see them roll and play and swim with the waves.

Then we went to a nudist beach! Where no one was naked…..until: 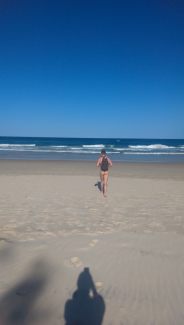 So Rainbow and Hervey are basically the towns that you go to as a backpacker as a stepping stone to do a Fraser Island tour. We were not doing a tour. There wasn’t an awful lot to do but we had some memorable experiences.

At Rainbow we checked out the Sand Dunes and watched another beautiful sunset over this natural wonder. 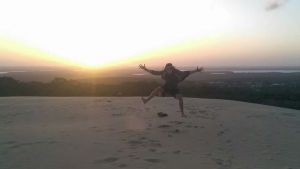 At Hervey we were very tempted into doing a Whale Watching Boat trip, but thinking of our funds we opted for the cheaper option of the Reef Aquarium. It was only small but they had some great information on the reefs and we got to feed the turtles! 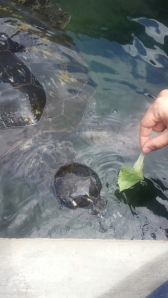 We also visited a tiny art gallery showcasing the local communities art work which was just lovely. Then had a walk through the Botanic Gardens, saw a wedding going on there and got eaten by midges.

Next stop was Agnes where met up with two of my friends from Uni Ben and Luis! They have been travelling Aus for 11 months so had lots of tips to share. We found a council owned camping area next to the beach to set up for the night and cooked a BBQ. It was our first time trying kangaroo….It was delicious.

In the morning we did another first and took a Surfing lesson! Oh my surfing is hard!! Our teachers were fantastic, couldn’t get more stereotypical surfer dudes it was great!

We got some pretty bad board rashes on our legs, got constantly battered by the waves, swallowed so much water, but it was so much fun!! We got up on our boards on and off for a second and then at the end Mark managed to stay on and ride a (small) wave!

This was our crew: 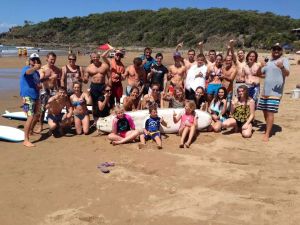 Heading into a city again was a bit strange. We were suddenly surrounded by McDonald’s and Hungry Jack’s (Australia’s Burger King) again. We had a bit of a struggle finding a place to stay in Rockie. First we tried the YHA Hostel there, but they had no space. Next we tried a free camping place, but it turned out you needed a toilet in your campervan and to be self contained (thank you to the Aussie man for the warning, we didn’t want to be woken up to an angry ranger), then we found a caravan park but the reception was shut. We went in anyway. Parked up in a spot that you probably weren’t meant to park in, but it did the job, we got some sleep, and paid the owners in the morning!

Rockhampton didn’t seem to have much going for it, but we found so good free things to do. The free zoo was a highlight, we got hissed at by an Emu, watched the kangaroos laze in the sun and stared in wonder at the sleepy koala. We also checked out the botanic gardens, the waterfall at Kershell Gardens and played a bit of golf at a driving range. 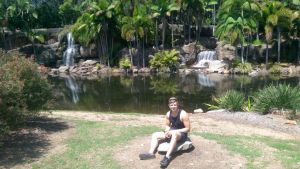 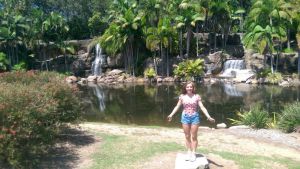 Just north of Rockhampton are these natural Limestone caves that were just amazing. We took the guided tour which was very informative and interesting, explaining all about how John Olsen and his sons discovered the caves back in the 1800s. It turned out that he managed to keep the caves a secret for over three years until eventually acquiring the land the caves were on and opening them up for public tours, which have been running ever since. 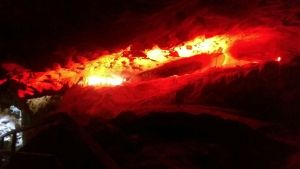 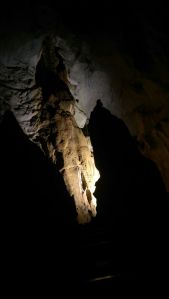 We were also kindly informed that what we were walking through as we headed through the caves, was in fact bat pop that had been trodden down over the years. Lovely.

Our next destination was a tiny little town with a recommended campsite, about half way between Rockhampton and Arlie Beach. A good place to stop to break up our drive. The campsite was in a lovely location and very clean and well run. The surrounding area was wetlands and we took a walk around it as the sun set (loving our sunsets!). We didn’t manage to spot any crocodiles, but we did see some wild kangaroos bouncing about against the backdrop of the sun setting behind distant mountains. 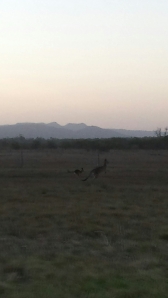 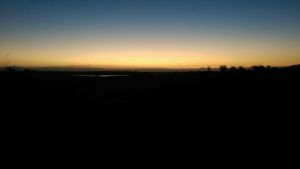 As darkness hit, we weren’t ready for bed, so headed into town. So as I mentioned tiny and looking a bit like the setting of a horror movie in the dark. It consisted of a church, a police station, an old meat factory, a school, a historical council building, a scattering of houses and of course, a pub. We ended up at the pub. There we met some of the locals: the caretaker of our campground, a friendly Kiwi, a famous rugby player passing through on a charity walk and the long-bearded barmen (who, judging by the newspaper clippings on the wall, I’m pretty sure used to be a crocodile hunter). After a chat, a beer and a warning to watch out for the mosquitoes and ‘sandies’ (sandflies) in the morning we headed of for a kip.

After a wash and a mosquito attack in the morning we headed on our way to Arlie Beach and the Whitsundays and this is where we are now!

Off for a 2 day boat trip this afternoon around the islands snorkelling and exploring (try not to be too jealous) and our first experience of the Great Barrier Reef!

One thought on “Road Trip: Byron to Airlie”